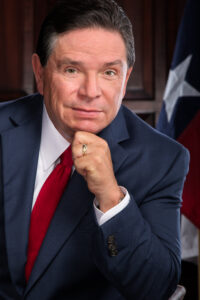 Rick has been practicing law since 1987 when he received his law degree from the University of Texas. He has a Bachelor of Arts degree in Government and a Masters degree in Public Administration from Angelo State University.

When Rick graduated from law school, he worked in Austin for the Texas Attorney General’s Tort Litigation Division for 3 years representing the State of Texas in personal injury and civil litigation cases. Rick then returned to San Angelo and worked as an Assistant City Attorney being assigned as the Municipal Court Prosecutor for 3 years and was then promoted to Senior Trial Attorney for the next 3 years. He then spent the next 10 years in private practice handling personal injury, criminal and family cases with Ratliff, Edwards & DeHoyos. The next three years he joined the law firm of Glasheen, Valles & DeHoyos, one of the top Texas law firms that focuses on in personal injury and wrongful death cases. He acquired invaluable experience in handling serious personal injury cases.

Admitted to practice in:

Injured in an Accident? Get a Free Case Review.

The Law Offices of Rick Dehoyos - Copyright 2023 All Rights Reserved.

Spanish
Back To Top
×